When I start a new project, especially one based on a specific genre, historical period or location, I always try to base the mythology of the world I’m building on relevant myths, legends and folklore.

For example, my Tales of the Black Museum is my version of Victorian London, viewed through the lens of Gothic literature, but sprinkled with appropriate creatures sourced from British folklore.

It’s sufficiently familiar for people to feel that these adventures might come from the lost notebooks of Doyle, Stoker or Wells, but also different enough to exist in its own right. I like to subvert expectations, but always strive to ensure that whatever world I create has its own internal logic and that any thing that does appear is appropriate to the setting.

I am approaching the Age of Unreason project in the same vein. I could be lazy, as some of the ‘Weird West’ games that are currently popular have done, and just ‘re-skin’ the standard horror tropes – the vampire, the werewolf and the zombie – in suitable attire for the setting, but given that the mythology of the Native American tribes has a vast panoply of strange creatures and entities that could be used, where’s the fun in that?

Of course, the problem with straying off the beaten path is that it can be slightly tricky to find a suitable model to represent the particular creature you want to include in your game. Plenty of options for depicting creatures from Greek mythology, but Mythic India…not so much.

Luckily for me, there is a company that specialises in producing a range of tribal warriors and ‘spirit beasts’ from the Americas and Pacific Islands…and that company is Paymaster Games.

Their range of figures is for their own set of wargames rules – Going Tribal: Warpath – which pits various pre-contact indigenous tribes against one another, and includes rules for 82 ‘spirit beasts’ with which to bedevil your tribal warriors. Both the rules and associated miniature range can be viewed and bought from their eBay store, which can be found here.

Now, as my fellow blogger Harry of the War Across the Ages blog, wanted to express his gratitude for the support, encouragement and inspiration that my own blog had given him, by sending me a small gift, this was an ideal opportunity to get a couple of figures from their range.

However, whilst I may crave Uktena, the Great Horned Serpent or Mishibizhiw, the Underwater Panther, you don’t take the piss when offered an unsolicited gift, so I went with smaller models, namely the Deer Woman and the Basket Woman.

The Deer Woman or Deer Lady is an entity primarily associated with fertility and love, but whilst mostly benign, it does have a reputation for luring promiscuous men into the woods to kill them. Ideal for my nefarious purposes. Whilst not specifically associated with the tribes located in Maine, the Iroquois have stories of this creature and that’s close enough for me. 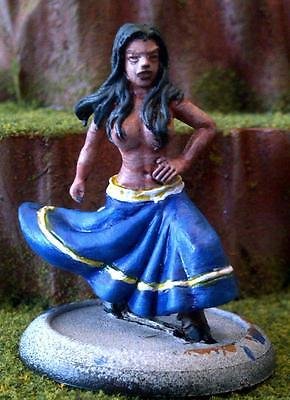 The model is a one piece metal casting, supplied with a lipped plastic base. Naked from the waist up, but modesty preserved by her long hair, her voluminous skirt swirls away from her deer legs beneath. Available for $7.00 (about £5.22) from the store.

The Basket Woman or Basket Ogress is a bogeyman figure of the Northwest Coastal tribes, a hairy marauder that preys on naughty or careless children, scooping them up in her claws and carrying them off in a back-mounted basket to be devoured at her leisure. The tribes of Maine have a similar creature called a Kukwes, which seems to be the male equivalent, but that’s also close enough for me! 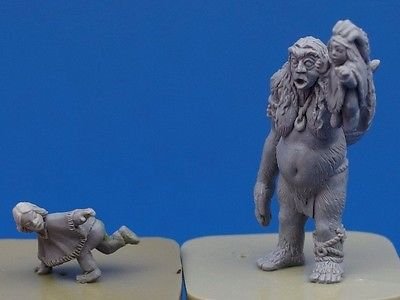 Available from the store for $8.00 (about £5.97), the figure comes in three parts and is cast in flexible resin, like that used by Black Scorpion Miniatures. The Ogress comes in two parts – main body and right arm, with the left arm holding a snatched child as a separate part. The third part of the set is a fleeing Indian child, which can be based separately or used to create a vignette.

A couple of interesting, well-sculpted and, above all, different figures to add to my menagerie of horrors of the North Maine Woods. A generous and appreciated gift from Harry, for which I thank him.

So, if you’re planning on venturing into the mythic vistas of either North or South America, or paddling your canoe to one of the Pacific Islands, and want suitable creaturs to menace your adventurers, look no further. However, bear in mind that as Paymaster Games is based in Seattle, you will have to factor in shipping costs on any order.

Paymaster have just closed their fourth Kickstarter and I’m already eyeing up some figures from this expansion – including Maui, the Polynesian Hercules, recently made more well-known by appearing in Disney’s Moana, voiced by Dwayne Johnson. I mean, who doesn’t want the Rock on their tabletop?

(*Moana gag, for those who’ve seen the movie.)

20 thoughts on “Where Be Monsters?”