Before I launch into the content of this post, to all those whose blogs I follow, please accept my apologies. I have been SO busy with one thing and another (which I won’t bore you with) that whilst I have read your recent posts, I haven’t really had a chance to comment on them.

Recently, the EuroMillions Lottery prize had reached a staggering £1.7 Million and they had stated that someone had to win it, so along with every other bugger in the UK, I bought a ticket.

However, as these were MY winnings (according to my wife), I was allowed to spend them on whatever I wanted…

So I bought a Snowspeeder – specifically the Revell 1:52 ‘Easy-Click’ model (the one that comes in a bag), because it was only £5.00 in Hobbycraft. 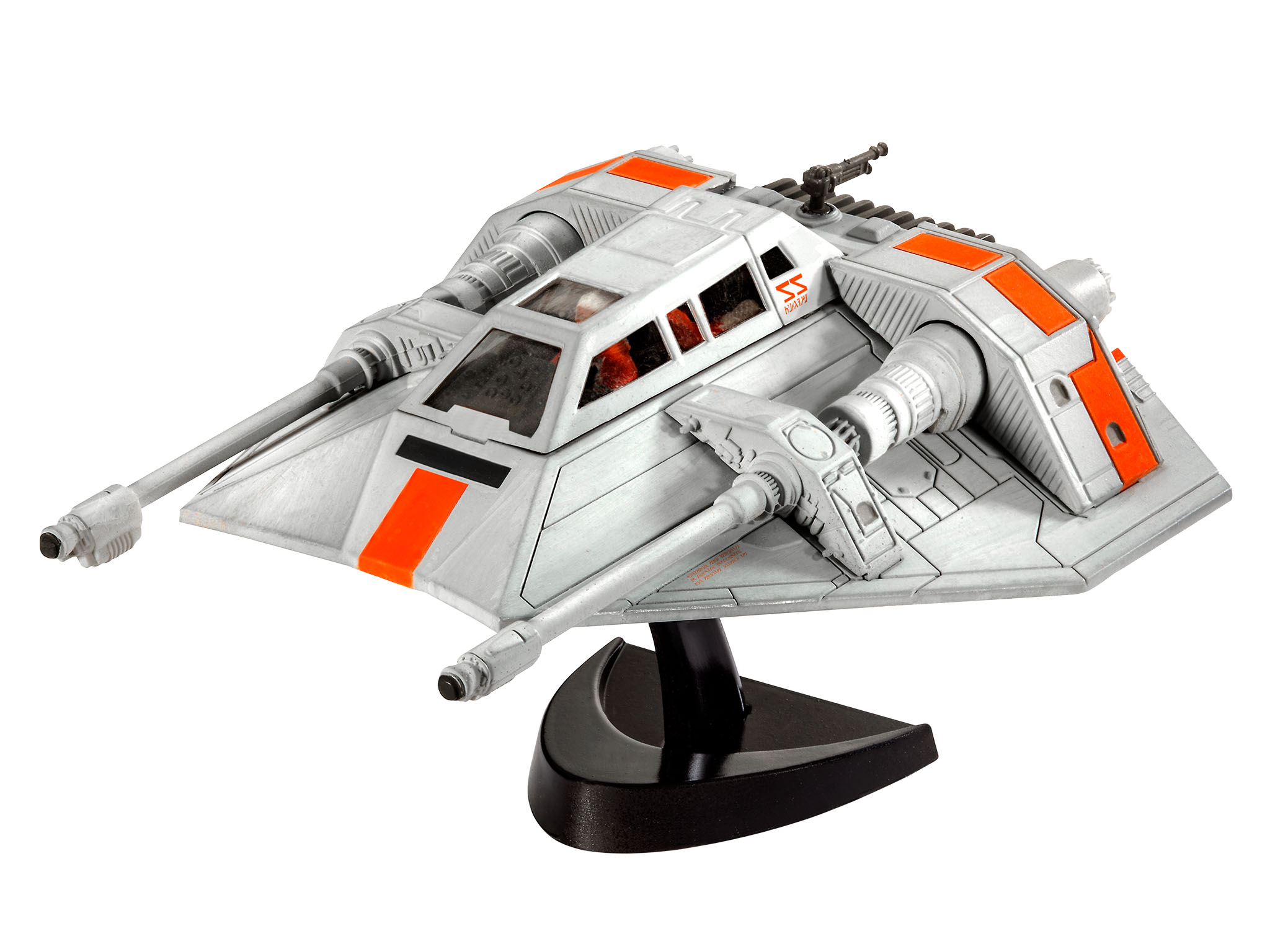 Now, I had broached this subject in a previous post, as I had read online that this model had been used as a proxy T-47 Airspeeder for Star Wars Legion, as it was roughly the same size AND Michael Awdry of 28mm Victorian Warfare had used one for a Star Wars inspired diorama and I wondered how it would scale in with my 28mm figures, as Legion’s figures are somewhat larger. I was assured that it should work fine and it kind of does – but took some Carrion Crow ingenuity to “make it so”, as you will see.

So, if you plan on getting one to use for YOUR Star Wars gaming, if you’re intending on using it as a crashed terrain piece or aerial support, you will have to paint over the cockpit glass, as the pilot and gunner figures clearly indicate that the speeder is too small.

To demonstrate this, the picture below shows a 28mm Future Skirmish figure from Moonraker Miniatures and next to it the Rebel pilot from the model kit – who I’ve just noticed seems to be grinning inanely…perhaps he’s soiled his flight suit like deformed Jelly Baby he is.

As my initial plan was to “just” replace the heads of the pilot with a suitable head from my multi-part “Dominion” figures, this clearly would not work.

However, after offering up one of my previously built Outrider figures to the model’s fuselage and the cockpit, I came up with a cunning plan…

The ‘speeder’ was obviously too small to be a two man craft, but could become a one-man “assault skimmer”, as the only thing that really scaled it was the pilots and the rear gun. As my Void Junker figures were multi-part, surely one could be adapted so he could fit within the cockpit? After some cutting, filing and gluing, I ended up with this first stage.

The control column is actually one of the backpacks from the Junker sprue, cut down to fit. As this looked like it was going to work, I continued with the build.

As you can see from the above picture, the craft looks more rounded than in the first picture. This is because as this model comes in a bag, rather than a box, the top part of the fuselage was a little warped, which was rectified when the underside was glued in place.

And almost done – including the flight stand.

On which it does balance very well.

However, the issue I had now was that the transparent canopy, which comes in one piece, wouldn’t fit  – as my Outrider was sitting too high. I could have just left it as it was, as it does look pretty cool already… but that’s NOT how I roll, is it? So, some scoring, snipping, cutting and filing later, the canopy was re-purposed as a rear and front screen, like so.

These have not yet been glued in place, as the intention is to undercoat the whole model in black spray first, carefully paint the other transparent bits to match the overall paint job, then attach them. But before all that, I have to remove a few gluey fingerprints that I managed to get on the model – C.S.I. Hoth, anyone?

And as you may have gathered from the title, my alternate Star Wars project will now go by the name of Distant Stars – as in “a galaxy, far, far away.”

Join me next time – which will hopefully be before the end of the month – for more Distant Stars fun, after which I will be celebrating 50 years on this planet by saying things like “I remember when wargames was all cardboard chits, rather than your fancy 3D printed bollocks…”