It was my intention for my last post to be longer, but when I realised what the time was, I decided to cut it short.

So, let us continue looking at alternative figures for Doctor Who gaming in 28mm…

A while ago, Roger Webb very kindly gifted me with a bunch of rubbery plastic figures that were a giveaway with the Doctor Who Adventures magazine, which included the New Paradigm Daleks, but also a variety of other monsters from NuWho. The majority of these were in scale with 28mm figures, but the quality of the sculpts was variable.

However, the figures for both the Silence and the Weeping Angels were fairly acceptable, so on to two pence pieces they went.

These figures are about 45mm tall and only come in a single pose. The reason they’re leaning is because they’d been stored in a tin with other metal miniatures on top, prior to basing, and due to the nature of the plastic, they’ve deformed slightly. I’ll probably have to hot and cold water them, to get them to stand up straight.

Obviously, the pose isn’t particularly dynamic, but the Warlord ones aren’t really that much MORE dynamic; If you bear in mind that the above three figures (which are 32mm scale don’t forget) are now £13.00, should I wish to bolster my Silence forces, I’d much rather support Attica Games, whose ESPchers have SIX different poses and you can get all 6 for £17.00.

The Weeping Angels come in two poses and were slightly taller initially, but as they’re supposed to be the same size as normal humans, I cut off about 3-4mm to make them a more sensible height;

Currently, they do look a bit rubbery and the left-hand angel’s arms are a little stumpy, due to the sculpt. However, with a decent paint-job, they can end up looking like this;

Not my work, but that of Michael Awdry of 28mm Victorian Warfare fame. I’ve only got one of each pose, and as the Crooked Dice one’s are OOP, I decided to bolster my forces with some of the Reaper Bones Angels of Sorrow; 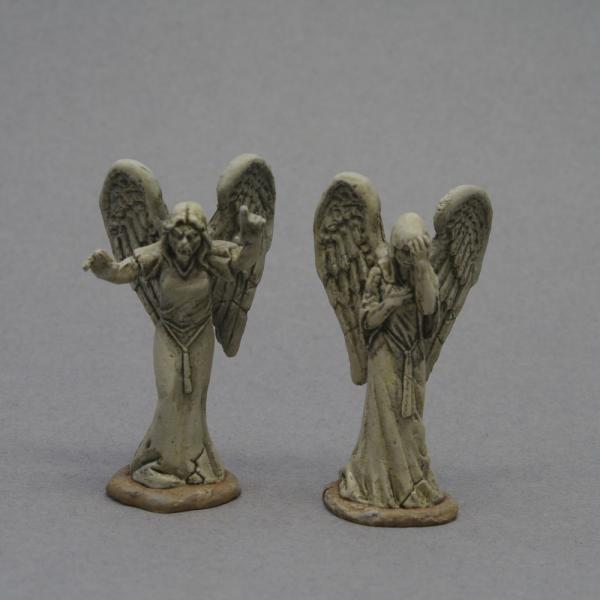 You get both figures for a very reasonable £4.00 and I think they should match well with the others.

Now, one of the character’s introduced during the 10th Doctor’s run was River Song, who made her first appearance in the 2008 episode “Silence in the Library”, portrayed by Alex Kingston. She spent the entirety of that episode dressed in a spacesuit, like so: 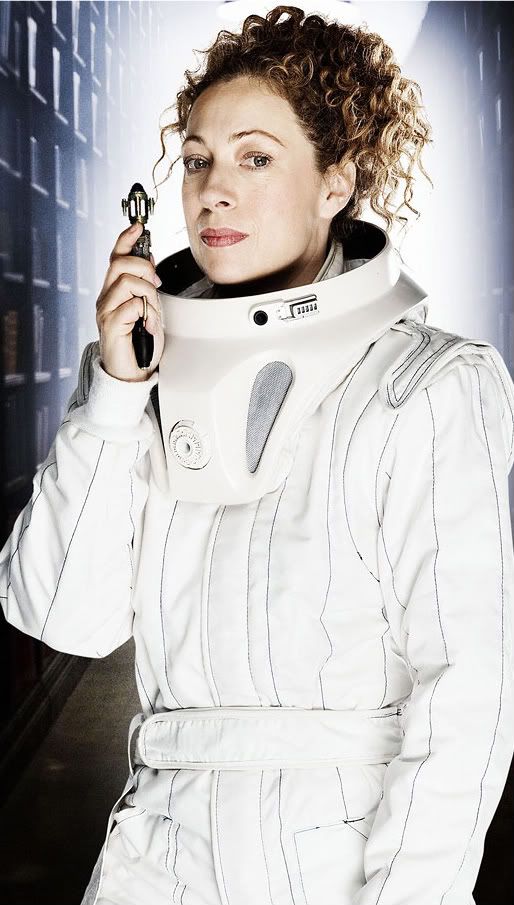 Now, whilst Crooked Dice do still sell a figure based on River’s first appearance – ARC Astronaut C for £4.00;

This doesn’t really represent the sassy, confident River of later episodes, and as Crooked Dice’s “Melody Lake” is OOP, I had to search elsewhere. 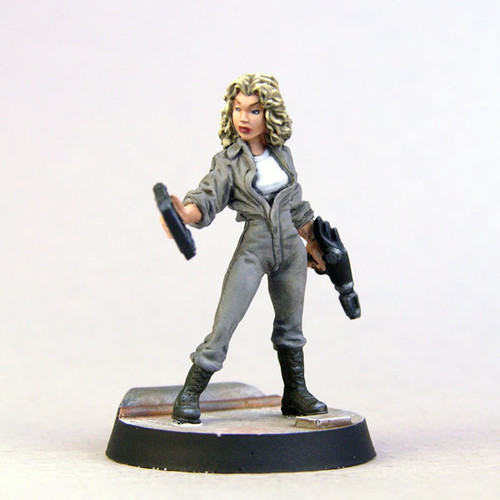 Available in the UK from Westwind Productions, it’s a little pricier than I’d normally pay for a figure, being £7.00, but it’s such a spot-on version of the character, I’m prepared to pay a little more…especially as I bagged a bargain on my next figure(s).

In a previous post, I mentioned that I was looking for additional minions for my vampiric count, to bedevil those stalwart men in blue from the Black Museum. I ended up going for the Myrmourn Banshees, as they were being offered at a reduced rate via the Mortal Realms part-work.

However, had I given the GW website a thorough browse, I would have discovered these “beauties”;

These are Ur-Ghuls, which are sightless horrors associated with the Drukhari – in other words, space ghouls that hang around with space dark elves. Anyway, you can buy a single metal Ur-Ghul from Games Workshop…for £12.00. Your other alternative is to buy the Warhammer Quest: Blackstone Fortress boxed game from GW, in which you get the four plastic Ur-Ghuls above. Of course, that’s £95.00, but you do get a bunch of other stuff too…

“But surely you mentioned a bargain, Jez?” I hear you cry. Well, as with most big boxed games, certain enterprising people will buy the game, then break it down into its component parts and sell them on eBay or other sites. So, I managed to pick up the four Ur-Ghuls above for £6.45 including shipping. That works out as about £1.61 a figure, so…BARGAIN!!!

And I will be using them in an upcoming Doctor Who adventure AND probably on the streets of Blackwell too – which explains the title of this post.

Until next time, have fun everyone and stay healthy.

We currently live in unsettling and uncertain times, with restrictions being imposed upon us for our own well-being, to slow down and prevent the spread of this unpleasant virus.

For those of you currently in, or likely to be in, enforced quarantine or self-isolation, it is not only important to maintain your physical health by following the guidelines set out by medical professionals in whichever country you live, but to also maintain your mental health.

Obviously, those who follow this blog are already involved in a hobby which can be performed whilst at home, even if it’s just finally getting around to painting those figures you’ve been promising yourself you’ll do “next time.”

However, those who post or follow blogs about our wonderful hobby are also part of a wider online community, a group of like-minded souls who gather round their computer screens on a semi-regular basis to see what our peers have been up to.

So, whilst we may be forced to self-isolate or practice responsible social distancing physically, there is nothing to stop you from visiting your favorite blogs and maybe posting that comment that you were going to post… when you had the time. Or maybe just checking in with your blogging circle via email, to check how they are.

It won’t take much of your time and, at the moment, “free” time is something we all have a bit more of than we’re used to. You never know, that one person you reach out to might not be coping as well as they’d like everyone to believe and your words may just help.

Now that the serious part of this post is out of the way, let’s have a bit of fun.

As regular readers had probably gathered from my previous post, my intention going forward is to provide an alternative to what the BBC and Chris Chibnall have been peddling as Doctor Who since October 2018.

I could wax lyrical and go into a full explanation of what is wrong with Mr Chibnall’s vision of what he believes Doctor Who should be, but what would start out as a deconstruction may very well end up as a rant, followed by the desire to form a mob of pitchfork and torch-wielding true fans, to round up all those responsible and summarily burn them at the stake…

Anyone who has attempted to watch any of the episodes of the series since Chibnall and Whittaker took over will understand exactly what I’m talking about.

So, rather than dwell upon it, I have decided that the televised adventures of the Doctor finished at approximately 6.27pm GMT on 25th December 2017, when the 12th incarnation of the Doctor (as portrayed by Peter Capaldi) finally gave in to the injuries he had sustained and began to regenerate.

MY version of events will continue from this point (as I demonstrated in the video trailer in my previous post – go and watch it if you haven’t already, it’s cool), with the ongoing tabletop adventures of the newly regenerated 13th incarnation of the Doctor.

Obviously, I will need a figure to represent him. Luckily, I already have one…

This is the Time Traveller (Mini 380) from the Time Lost Heroes set, £4.00 from Crooked Dice. Based on the eponymous hero from George Pal’s 1960 “The Time Machine” movie, as portrayed by Rod Taylor, I’d always intended using this figure as a Time Lord, but not specifically as an incarnation of the Doctor. But times they do change…

And unlike Chibnall, I fully intend on using as many of the Doctor’s previous foes as I can feasibly get away with, but staying firmly within existing canon and what I believe Doctor Who should be. I do have several of the Doctor’s more iconic foes already – including Daleks and Cybermen – but am always on the lookout for 28mm figures to proxy characters that either are unavailable from Black Tree Design or the figures available are a bit naff.

For example, the figure from Black Tree representing Anthony Ainley’s incarnation of the Master is a bit…meh; You’re not on the list, you’re not getting in.

It could be the paint job on the Black Tree site or that he looks a bit like Gareth Hale from the comedy duo Hale & Pace, but I’ve yet to see a painted version of this figure that has made me want to buy it.

Which is from North Star Military Figures and is sold as the Sheriff of Nottingham in their Robin Hood range, is a much better version of the Master, in my opinion. And it’s only £2.00, which is cheaper than Black Tree’s version.

Whilst she only appeared in two official adventures (as I think we can disregard Dimensions in Time – because it was a charity special and a bit rubbish), no-one currently makes an official representation of the Rani, as portrayed by Kate O’Mara; 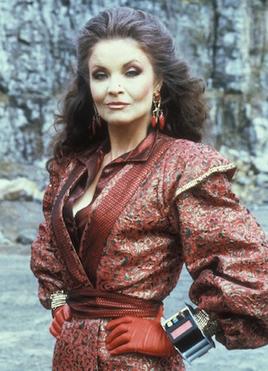 Both Black Tree and Warlord do figures of the Tetraps, which appeared in the second televised adventure to feature the Rani – Time and the Rani – which was also the first episode to feature Sylvester McCoy as the 7th Doctor, but neither does a figure of the Rani.

So, the above image is the more iconic version of the Rani, dating from 1987, so we’re talking big hair and an 80’s sci-fi vibe. This thinking led me to this figure…

I know it’s supposed to be Diana from the original 1980’s sci-fi series V, one of the leaders of the Visitors, but this figure of Alien Invader 1A from Crooked Dice for £4.00, does have the look and sassiness of the Rani, so I’m personally going to go with this.

Whether my incarnation of the Doctor will face either of these iconic foes remains to be seen, but I certainly intend on having some fun finding out, so be sure to continue to ‘tune in’ to the Buffet.

The real 13th incarnation of the Doctor will be returning to your (computer) screens very soon, available exclusively on Carrion Crow’s Buffet, in “Who Goes There?”