May is officially Monster Month… well, at least according to Keith over at Dead Dick’s Tavern and Temporary Lodging it is.

Now, when these monthly (or longer) community events come around, I always look at whatever project I am currently involved in and see my participation will either advance the current project or act as a welcome break from whatever I’m working on.

Keith has specified that it has to be a MONSTER, not a humanoid – so no orcs, goblins, etc. As I’m currently in the midst of my 13th Doctor project and the majority of Doctor Who monsters are “men in rubber suits” (which, incidentally, was going to be the original title of this post – until I discovered that Googling this phrase doesn’t bring up images of Godzilla or the Creature from the Black Lagoon, but a whole other past-time…which probably involves a lot of talc.)

However, I feel that as long as the figures I choose are suitably “monstrous”, these will still qualify.

So, these are the figures chosen to act as my entries for Monster Month; 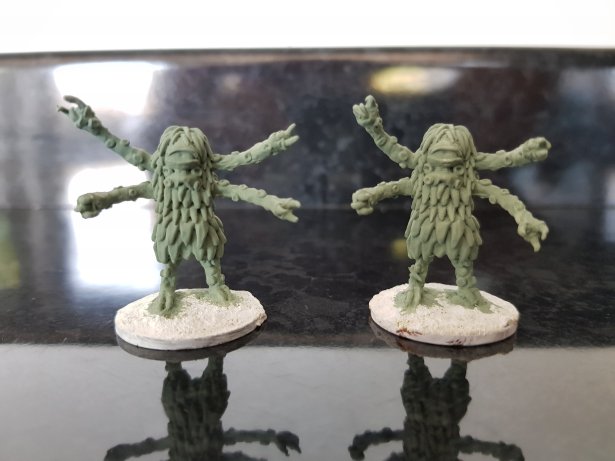 A pair of Cyclopian Aliens, sculpted by Mr Roger Webb and released through Wargames Supply Dump, prior to its’ closure… and therefore no longer available.

I felt these not only fit Keith’s definition of ‘monster’, but also were an ideal creature to appear in a future episode of the true adventures of the 13th Doctor or TruWho, as I like to call it.

So far, they’ve been based on two-pence pieces, Milliput added to blend the integral base to the 2p base, undercoated in white and given a base coat of GW Ghoul Grey – which is actually a shade of green, as you can see from the picture above. Currently, undecided in what colour direction I am going to go with these, hence just the base coat so far.

But other figures for this project have been progressed, such as Abslom Daak and Doomlord; 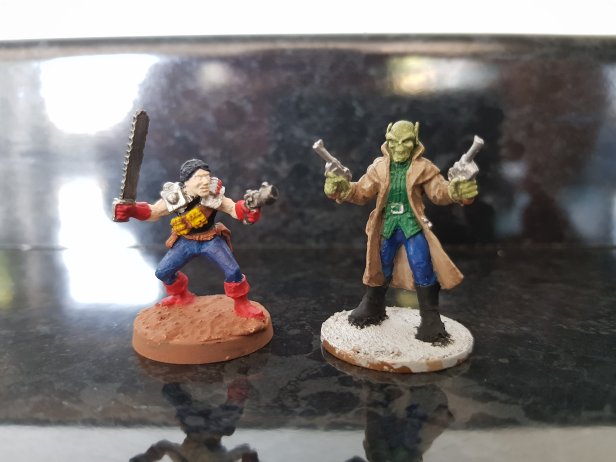 Daak has had a few more of the smaller details added to him, as well a wash of GW Marine Dark Blue to his trousers, as they were a touch too bright.

Doomlord received the same on his trousers, plus washes on his coat and head and hands, to bring out some of the detail. I also decided to paint his tunic in GW Woodland Green, but the wash of Docrafts Jungle Green wasn’t dark enough to bring out the detail, so I’ll probably give it a wash of black when I do his guns.

I have also progressed my Silence figures, by painting their shoes black and giving their heads and hands a wash with Docrafts Chocolate Brown, which I think has worked reasonably well to bring out some of the sculpted details. They need their suits darkened, shirt and ties tidied up, bases done and potentially their little piggy eyes painted in, which will make them look suitably creepy. 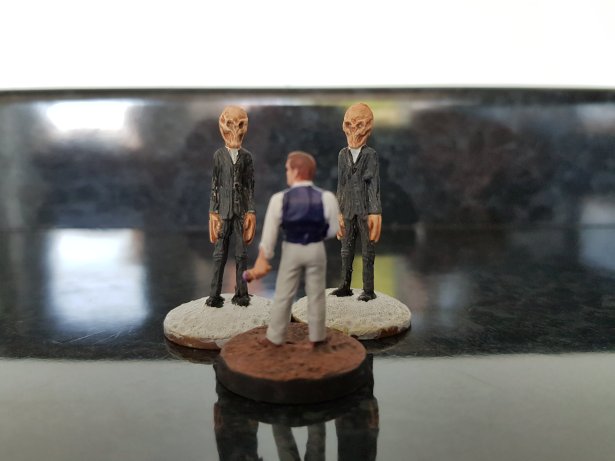 And finally, some figures that have now left the Tray of Shame – firstly, my Weeping Angels, surrounding the 13th Doctor; 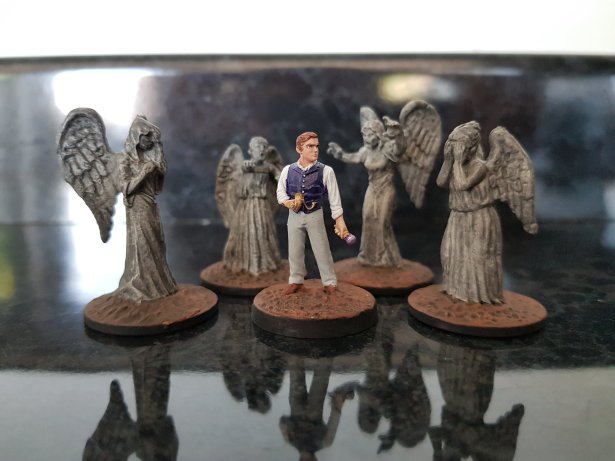 I decided to just paint the bases up, as Weeping Angels in Doctor Who traditionally don’t have lichen or moss growing on them.

And the final figure of this post – an Ice Warrior. 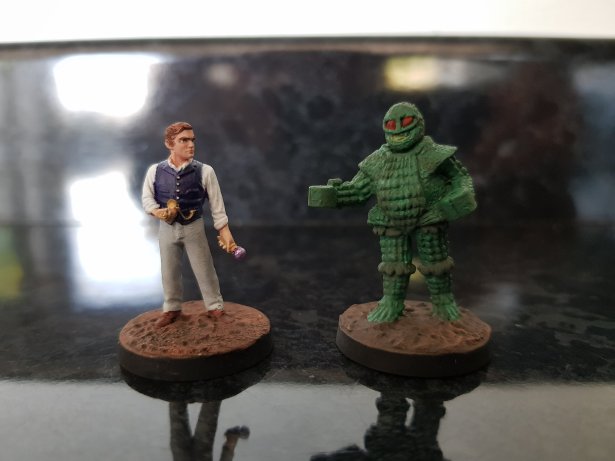 Whilst the Ice Warriors that have appeared in the current series have been somewhat shinier (see series 7’s Cold War and series 10’s Empress of Mars), this is a Black Tree Design figure, so is the older style Ice Warrior, complete with hairy bits, so I went for colouration similar to a crocodile… or an avocado.

Undercoated in white, then a base coat of GW Woodland Green. The hairy bits were painted with Docrafts Burnt Ochre, the eye panels with Docrafts Cherry Red and the exposed facial parts with GW Rotting Flesh. Then the whole figure (bar the eye panels) was given a wash of Docrafts Jungle Green, which muted the base green and blended the brown into the whole figure. The base was given my usual Docrafts Chocolate Brown base coat, then washed in Burnt Ochre, then the base rim was painted black and the figure was done. I’m pretty pleased with how it turned out.

Next time – unsurprisingly, more Doctor Who. I need to finish up the cast for the next episode and possibly build the control room of the 13th Doctor’s Tardis.

15 thoughts on “Here Be Monsters…”