Regular visitors to the Buffet will have noted that it’s been rather quiet of late. And whilst I have been keeping up with what others have been doing hobby-wise, a certain ennui regarding my own hobby had set in.

Given some “spare” time, I found myself picking up the latest Rivers of London novel, watching documentaries about My Little Pony on Netflix or, having my arm twisted by my daughter, sitting down to watch Frozen, which up to this point, I had successfully managed to avoid. (NB: I did trade the last one off – she has to watch a film of my choice with me, so she will be venturing Into the Spider-Verse in the near future….)

I finally bit the bullet, set up my painting station on the dining table, retrieved the Tray of Shame and made some inroads into the contents.

First up, some modern Daleks. Weirdly, because of the way I paint, four of the five Daleks in the tray actually represent the stages in which I’ve painted these malevolent pepper pots, as you can see from the picture below:

So, from left to right; Stage 1- assemble Warlord plastic Dalek and glue to textured 2 pence piece, to give the figure some heft and stop it blowing around in a strong breeze. Paint the base and bumper Docrafts Dark Grey.

Stage 2 – Paint entire body in Docrafts Bronze, the bumper in a home-mixed dark grey, the plunger arm, blaster, eye-stalk and head lights in GW Chainmail and the end of the eye-stalk and plunger arm with Docrafts Noir.

Stage 3 – Give the neck rings a wash of Docrafts Noir to add some shading.

Stage 4 – Paint the slats and sensor globes with Docrafts Shining Gold. Give the neck rings another thicker wash of Docrafts Noir, then realise that you’re going to have to repaint the horizontal rings again, as it’s too bloody dark.

Stage 5 – sulk for a bit, then go and paint something else instead.

I did mention that four of the five modern Daleks were painted in the current livery. The remaining assembled Dalek has been given an alternative paint scheme, as I was quite taken with the idea of attempting to replicate the colour scheme of the Eternity Circle Daleks, which are from Engines of War by George Mann, the first Doctor Who novel to feature the War Doctor.

I’ve not actually read the book, but having seen images of the Eternity Circle Daleks, as below, I thought they looked rather cool; 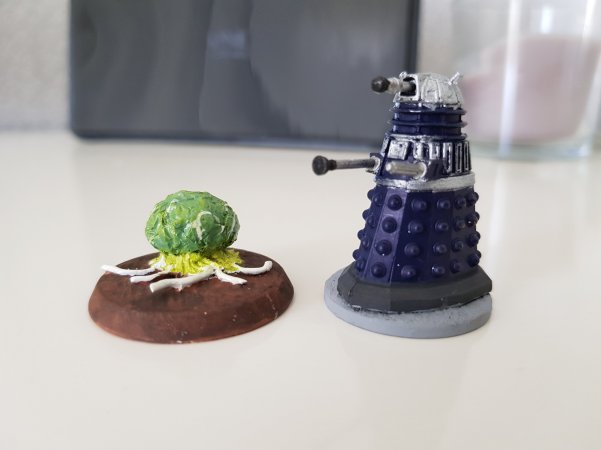 Yeah, it’s a bit messy at the moment, but the silver paint was a little runnier than I’d anticipated, hence the splodginess of the silver trim. It will be tidied up, but the general idea is there.

My Rutan model is sharing this shot, as I finally managed to get out to Hobbycraft to try and find some varnish or the equivalent, to provide some needed ‘wetness’ to this model.

I ended up with some Tamiya Semi Gloss Clear, which is apparently an acrylic clear ‘paint’, which I liberally coated my Rutan with. It does kind of work,although you can’t really see this in the picture. I’m now wondering if I would have been better off just using some thinned PVA instead, but the 10ml pot was only £2.00, so not a major expense.

Finally, we have my (almost) completed Sontarans. All five of these chaps were given the same treatment. First, all weaponry was given a wash of Docrafts Noir. Not happy with the coverage, they got a second thicker wash until I was happy. The belts, which I’d failed to paint last time, were painted in with GW Enchanted Blue, to match the helmets and shoulder pads. Then the whole of the figure, except for the weaponry was given a wash of GW Marine Dark Blue. 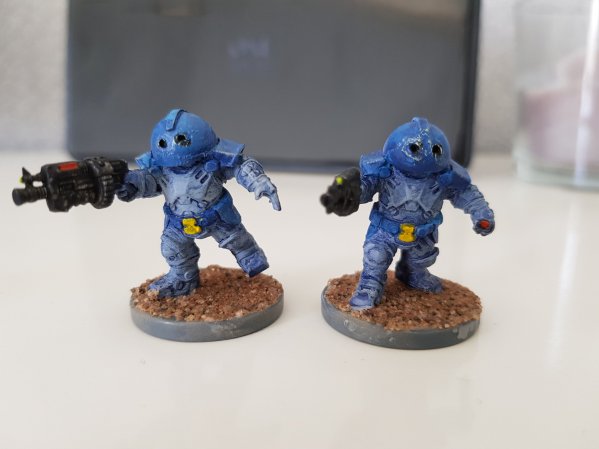 This was a bit of a mistake, as it made them too blue, meaning that the body-suits almost matched their helmets, shoulder pads and belts. Much gnashing of teeth was heard. Out came the Docrafts Dark Grey and all the exposed parts of the body-suits were given a light drybrush, to tone down the blueness.

Belt buckles were painted GW Orc Brown (which is a dark yellow), followed by GW Sunburst Yellow. Vents on guns got filled with my own mix of ‘Pumpkin Orange’, whilst gunsights were dotted in with GW Bogey Green. The end of each barrel got a spot of Docrafts Noir to simulate the hole in the end, as did each helmet eyehole.

As the creation of the eye-holes for the helmets had left a little scurfing on the surface, I decided to lightly dry-brush these with GW Mithril Silver, as I felt it made it look like these were battle-damaged, with the blue paint having been scratched off where the helmets had been tossed aside in the heat of battle. 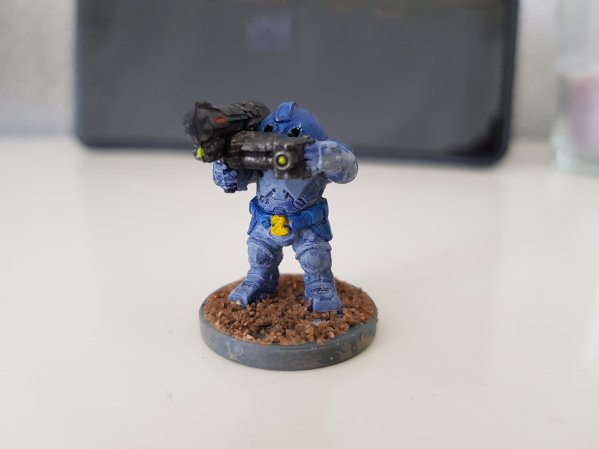 The final touch was to paint the bases with thinned down PVA glue, then dip into my jar of sand, to texture the base. The bases still need painting, as the grey still shows through, but I may try and replicate the colour of the sand  I’ve used, as the contrast works quite well.

However, whilst I did texture the bases last, having been convinced this was the way to do it by watching Sorastro’s Star Wars Legion painting tutorials on YouTube, I won’t be doing this going forward. PVA and sand is not the same as basing medium and does not act in the same way, so I’ll be texturing bases for plastic figures BEFORE I start painting next time. You live and learn.

However, I am pretty pleased with how my proxy Sontarans have come out. They LOOK like Sontarans, but unlike the ones appearing in NuWho, these ones actually look like they have been involved in a long-running war, rather than having just stepped out of the changing room. Sontarans you can believe in…

Now, I just need some Christmas baubles so I can build some scout ships.