My last post was over a month ago, as I’ve been insanely busy at work, so not really had much chance to do anything hobby-related, other than my annual trip to Warfare in my home town of Reading.

Interestingly, this is the last time the event will be hosted in Reading, as next year it’s moving to Ascot and will be hosted by the racecourse there – I’m guessing that it has now outgrown the Rivermead Leisure Centre, so it should be interesting to see how this changes the dynamic of the event.

I did pick up a few bits, but as most require some kind of assembly, I thought it best to save showing these until I’d actually built them – which will occur in the near future – but suffice to say that items were picked up fro both my Distant Stars project and for Tales of the Black Museum, although I failed to picked up the Victorian Nannies pack from Belt Fed Gaming, as my budget wouldn’t quite stretch to this on top of my other purchases.

Now, part of the reason that I was so busy at work was due to a pre-booked long weekend to celebrate my 25th wedding anniversary, which due to the draconic rules of my employer, as I had used up my allocated holiday, I had to make up the two days I required in the week preceding and following the break. This was quite a chore, but worth it, as it left me to trot along to Heathrow and board a flight for the Eternal City – hence the title of this post.

As I had never been to Rome before, advice from Italian friends and a guidebook were consulted and a shortlist created of sites we wished to see.

Obviously, top of the list was the Coliseum, although I thought it was going to be bigger… 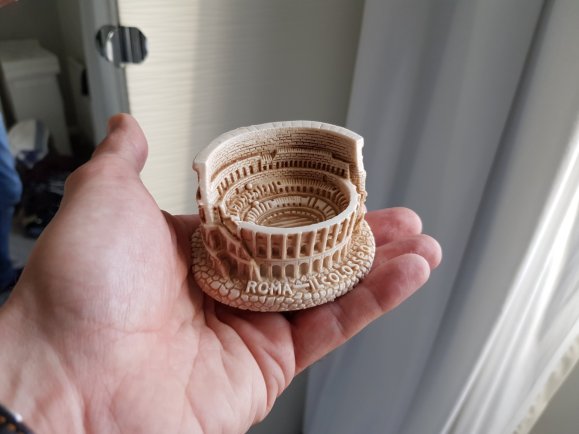 Yeah, I bought some cheap tourist tat, just because. Anyway, the real deal is rather more impressive. 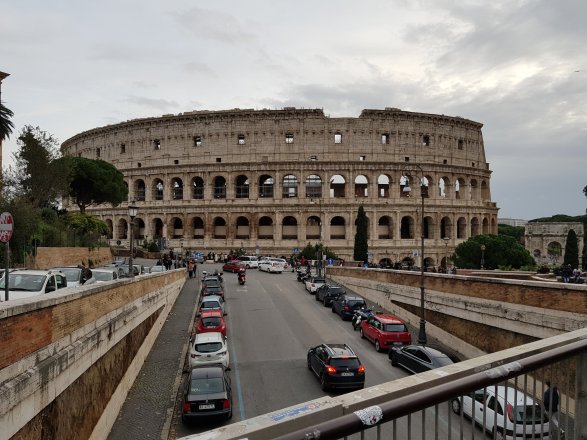 As we circled the perimeter of the monument, I was struck by how much like a football stadium it looked. But, I guess that it was the “Premier” entertainment site of its day, so it seems rather fitting that most football stadiums do resemble it in some way. We didn’t go in, as we were advised that unless you desperately wanted to see the inside, it frankly wasn’t worth the entrance fee, but just being next to  such a huge edifice was enough for us.

The following day, which was slightly damper, we ventured forth to some of the other famous landmarks. The Trevi Fountain is well worth a visit, as it is very impressive, although I failed to get a decent picture as it was swarming with tourists.

The Spanish Steps, made famous from the 1953 movie Roman Holiday with Audrey Hepburn and Gregory Peck, were underwhelming. We both were of the opinion that we’d seen better steps elsewhere.

Next, however, was the Parthenon – which is definitely worth a visit and, best of all, it’s free! 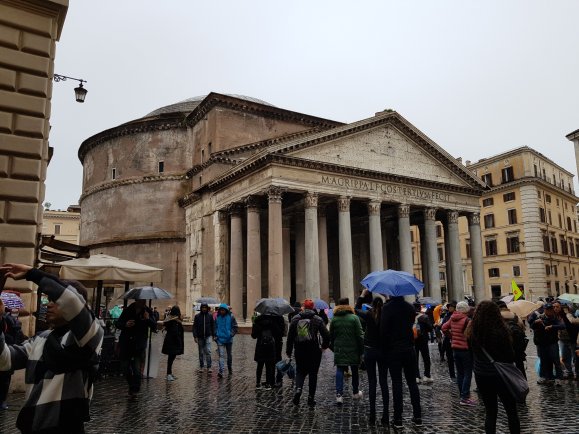 Absolutely huge and beautiful inside, although the centre of the floor was cordoned off, as the circular skylight is open to the elements and as you can see, it was a bit wet that day.

Here’s a brief video of the inside, showing the entire circumference and huge domed roof.

We then went to the Musei Capitolini, one of the premier museums in Rome and spent a good couple of hours wondering around the various exhibits. Obviously, I had to take a picture of this one; 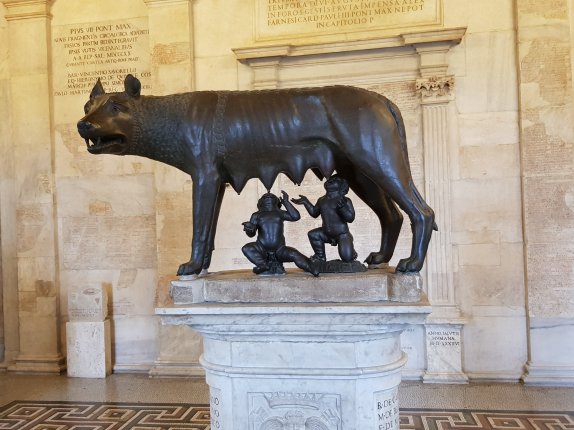 Now, the museum is spread over two buildings and because it was raining, we used the third ‘part’ of the museum – an underground display area filled with stone plaques – to get from one building to the other. However, halfway along this corridor is a set of stairs leading to daylight, so we took a wander up there.

Which was the right thing to do, as it lead to a balcony that overlooked the Imperial Fora, free of tourists and with spectacular views of the whole site, without having to slog through the mud or pay an entrance fee for Palantine Hill. 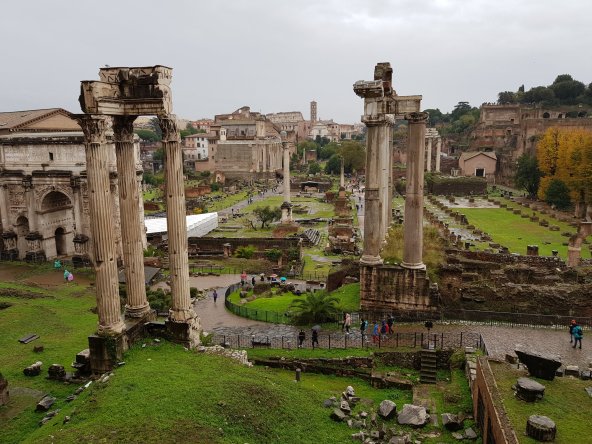 This was very familiar to me, as parts of this were digitised and used in the Assassin’s Creed: Brotherhood video game, which I watched my son play through. Pretty cool to see it actually in the real world.

The second part of the museum was dominated by statuary, including this rather large fountain, which I thought warranted a photo. 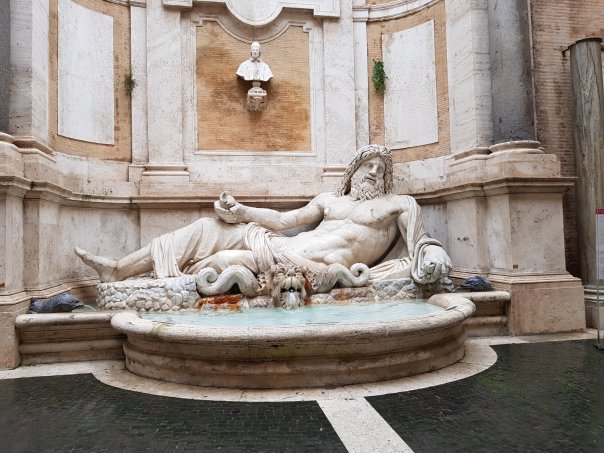 The next day was due to be better weather, so we walked over to St. Peter’s Square, with the intention of doing both St. Peter’s and the Vatican Musuem. 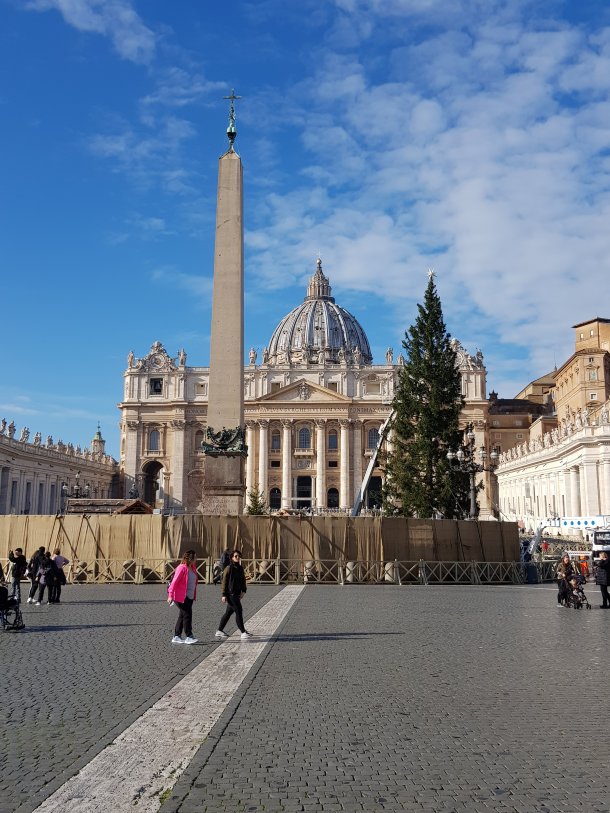 The hoardings were because they appeared to be building a Santa’s Grotto in the middle of the square. As the queues were getting a bit long for the church tour, we went straight to the Vatican Musuem instead, as we had pre-booked slots.

Now, this may be a bit controversial, but whilst I can say that I’ve been inside the Vatican and seen the Sistine Chapel, unless you’re very into your Renaissance artwork and are happy to spend several hours walking through seemingly identical rooms with similar frescoes on the walls, I would recommend that you don’t bother.

Having reached saturation point, we bailed on the museum, bought ice cream and wandered along the Tiber, which resulted in coming across this lovely church on the way. 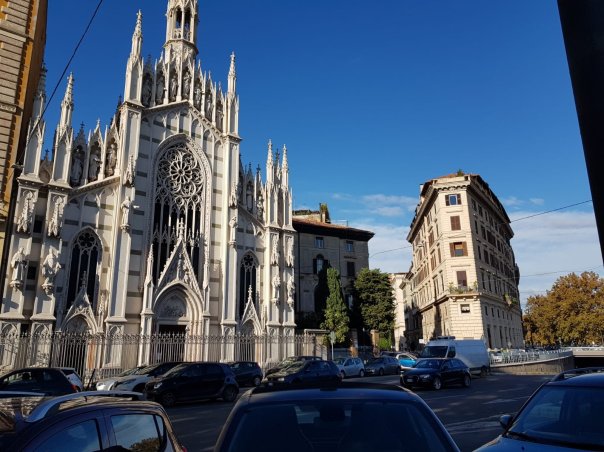 Looks a bit New York-y to me.

We may have then done a bit of shopping and found a genuine Irish bar (The Scholar’s Lounge) and had a wee drink or two.

Hopefully, posts will be a little more frequent going forward – with robots, armoured personal carriers and Victorian conveyances, amongst other goodies.